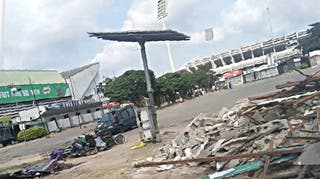 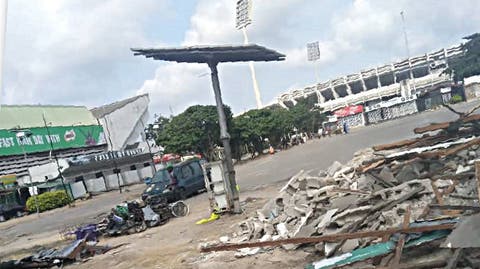 “I’ve been selling cooked food here at the stadium since 1992. I can’t understand what’s happening. We were given a 14-day ultimatum to move our belongings out of the stadium, which we complied, and now they’ve demolished my shop along with many others,” lamented a tearful Mrs Funmi Ojo, a business owner inside the National Stadium, Lagos, told Saturday PUNCH on Friday.

The 60-year-old Ojo, owner of Food Village, a restaurant inside Sports City, as the stadium is popularly known, is one among hundreds of business owners affected by the renovation exercise of the regime of the President, Major General Muhammadu Buhari (retd.).

The demolition, which began on Wednesday, had many of the shop owners, who had been at the arena for several decades, in misery with no means of survival in sight.

Expectedly, the atmosphere at the stadium, which had been under closed to users since the outbreak of the coronavirus in March, was that of anguish, wailings and lamentations when one of our correspondents visited the arena on Friday.

“Look at me, I don’t have a husband, through my food business, I was able to train my children, my last child graduated from university two years ago, but he is jobless. We feed on my food business in the stadium. We are begging the government to help us,” Ojo added.

The stadium, built in 1972 by the military regime of Gen Yakubu Gowon (retd.) had been left in ruins since the early 2000s, and last hosted a national team game in 2004, with football matches moved to the nearby Teslim Balogun Stadium.

With its decay, it was converted to a venue for religious gatherings, wedding ceremonies, political campaigns, parties and musical concerts,  while hoodlums, popularly known as Area Boys and illegal squatters, turned the national edifice to their homes.

However, in a bid to revive decaying sports arenas nationwide, sports minister, Sunday Dare, immediately after he was appointed last year, urged top Nigerian businessmen and corporate organisations to fund their renovations.

Billionaire businessmen Kessington Adebutu and Aliko Dangote both promised to renovate the Lagos stadium and Moshood Abiola National Stadium, Abuja, respectively, after a meeting with Dare.

The demolition exercise in Lagos is expected to launch the stadium’s renovation by Adebutu, who runs betting company Premier Lotto, popularly known as Baba Ijebu, in the coming weeks, while Dangote this week began work on the Abuja stadium.

In June, sports minister Sunday Dare inaugurated a Ministerial Task Force that would oversee the renovation of the stadium.

“Government’s plan to fully concession the Surulere Stadium in a PPP arrangement is ongoing, even as the ministry seeks to commence some renovation works. It’s a sporting infrastructure built by the government and not a mall or business premises,” Dare tweeted.

On August 17, the Ministry of Youth and Sports Development gave occupants of the Lagos stadium a seven-day notice, which read in part, “You are hereby given seven days notice to quit and deliver up vacant possession on or before August 24, 2020, failure of which we will take further necessary legal steps to eject you. Take further notice that you are to pay all arrears of rent owed before you vacate the complex.”

However, after a public outcry and pleas by the shop owners, the ministry gave the occupants an additional seven-day extension, which expired on September 1.

But the government’s demolition exercise comes at a cost, as occupants of structures in the arena, which were not in the initial plan, were forced to vacate their buildings.

Chijioke Hygynus, who sells jerseys and football kits, said he and many of the shop owners have been forced to auction their goods, with nowhere else to keep them.

“They gave us seven days and another seven days that has ended. Many people are parking or have parked. I wonder where they want us to rent shops after what COVID-19 did to us. Many of us are auctioning our goods; where can we keep them all?”

Temitope Lawal, who sells table tennis equipment, is one of those forced to auction his goods.

“I am selling my sporting goods as auction so I don’t lose them totally. This is very painful because I have a family to cater for.”

Ugochukwu Onuorah, General Manager, Gate Gold Nigeria Limited, a sports equipment and products shop, said he deserved compensation from the FG, following the demolition of his shop, which he claimed was built by him.

“It’s not easy leaving this place because we built this structure. Now, it’s going to be pulled down. Though we know that the government wants to renovate the stadium, it is only fair if we receive some form of compensation from the government,” Onuorah stated.

However, Segun Sosanya, a masseur, is optimistic he may be considered for a return once the stadium’s renovation is completed.

Sosanya stated, “We had a prior notice on the demolition of illegal occupants and structures in the stadium. As an individual, I have taken it in good fate. We heard that those of us who have been doing business within the complex would be considered first for allocation of space once they finish work.”