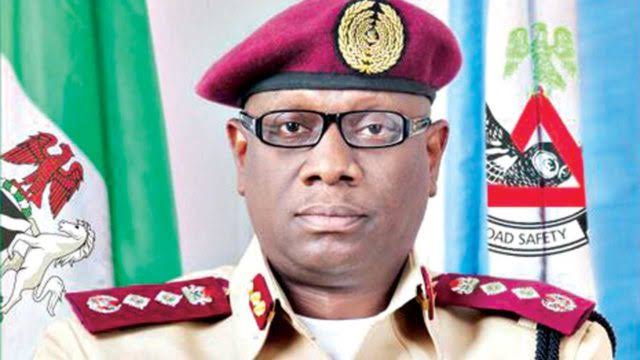 Coalition of Civil Society Organizations for Justice and Equity (CCSO-JE) has commended President Muhammadu Buhari and Federal Road Safety Corps Marshall, Dr. Boboye Olayemi Oyeyemi on the effectiveness of FRSC, sequel to the highly improved welfare of Corps and adequate provision of the operational logistics.

Chief convener of the organization, Comrade Olayemi Success gave the commendation in a press statement in Abuja on Monday, and was made available to National Association of Online Security Reporters, NAOSRE.

Success applauded President Buhari for re- appointing Oyeyemi as the Corps Marshal of the Federal Road Safety Corps (FRSC) two years ago. According to him, it was a square peg in square hole.

He commended the Corps Marshal for the recent great fit of having Nigeria Road Safety Strategy (NRSS), noting that Nigeria is the first Nation in Africa to have such great strategy and when fully implemented, it’s a global strategy that will guide everyone to have a safer road, filled lives and a stronger economy.

He said FRSC under Oyeyemi has become very effective in the mandate of the Corps and near zero corruption incidence due to highly improved welfare of the men and women of the Corps and adequate provision of the operational logistics.

“FRSC that was known to be operating from rented offices now operates mostly from owned offices accommodation as a result of judicious use of the available resources, these and many more are achieved under the watch of Dr Oyeyemi as the CM of FRSC,” he said..

He further applauded the establishment of The National Traffic Radio (NTR) that enable members of the public to get information on traffic updates and road conditions across the country. Also, it is an avenue to report negative encounter with members of the Corps including demand for bribes directly to the studios.

However, Civil Society Organizations for Justice and Equity (CCSO-JE) congratulated Dr. Boboye Oyeyemi for his achievements as the Corps Marshall, urging him to keep justifying the confidence of President Buhari in him by sustaining and improving the achievements of the past, knowing well that there is always room for improvement.

He also called on well meaning and patriotic citizens to rise in astute solidarity with Federal Road Safety Corps (FRSC) under the leadership of Oyeyemi with a view discharge their responsibilities maximally for safer road and fuller lives.

Finally, he urged all detractors of Oyeyemi to stop the distraction and join hands with him for the betterment of FRSC and Nigeria at large.