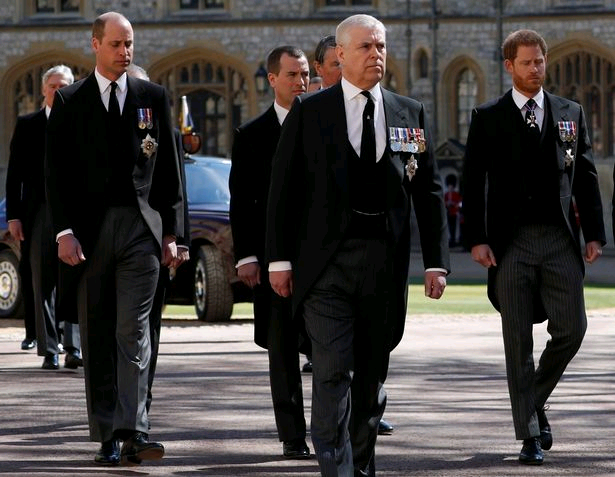 Prince William and Prince Harry walked behind Prince Philip’s coffin at his funeral in Windsor Castle, but Queen Elizabeth decided they would not stand next to each other following their fallout.

The Duke of Cambridge Prince William has been reunited with Prince Harry as the feuding brothers come together to pay their respects to their grandfather.

The men joined other members of the royal family to walk behind Prince Philip’s coffin ahead of his funeral at Windsor Castle.

However they did not stand shoulder to shoulder, with their cousin Peter Phillips standing between them in line with the Queen’s wishes.

Dressed in black suits with the military medals pinned to their chests, they looked solemn as followed the custom build Land Rover that carried the Duke of Edinburgh’s coffin to St George’s Chapel.

The brothers’ already fraught relationship hit a new low last month after Harry and his wife Meghan Markle made a series of shocking allegations about The Firm in their interview with Oprah Winfrey.

After the procession, the brothers walked into the chapel where William took a seat alongside his wife, Kate.

However Harry will sit alone in line with social-distancing rules. Heavily pregnant Meghan Markle was not able to attend on medical grounds.