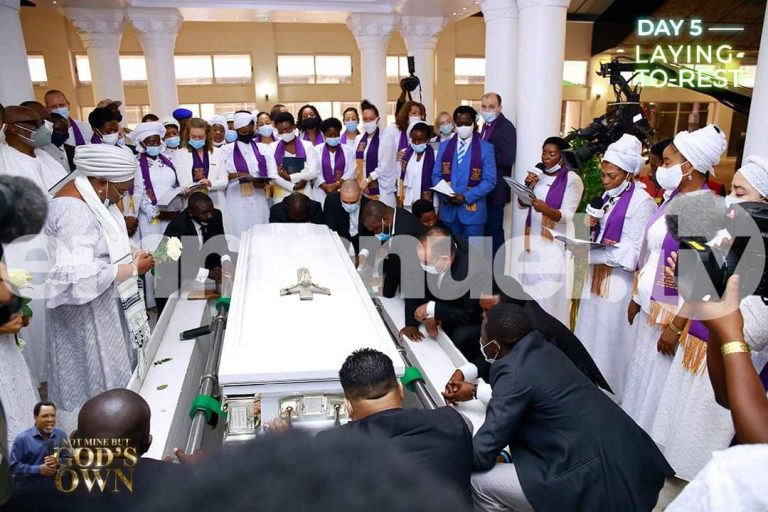 Fastnews Nigeria reports that tears and tributes flowed at SCOAN.

Tears flowed uncontrollably as tributes continued pouring in on Friday as the remains of Temitope Balogun Joshua, popularly known as Prophet T. B. Joshua, the founder of the Synagogue Church of All Nations (SCOAN), is laid to rest in Lagos.

The body of Prophet T. B. Joshua, who died on Saturday 5th of June 2021, in Lagos, shortly after concluding a programme at his church, was interred at the church premises on Friday – after a week-long programme.

Notable personalities in attendance at the laying-to-rest programme include, the Lagos State governor, Babajide Sanwo-Olu, who was represented by the Lagos State Commissioner for Home Affairs, Mr. Anofiu Elegushi, Ondo State governor, Oluwarotimi Akeredolu, the wife of Ooni of Ife, Olori Silekunola Naomi Ogunwusi, representatives of the President of the Christian Association of Nigeria (CAN), diplomats, amongst others.

T.B Joshua, a hitherto unknown prophet of the Celestial Church of God Christian denomination in Lagos, rose to become one of the most powerful preachers in the continent with thousands of followers across the continent and beyond.

The father of three hailed from Arigidi Akoko, in Ondo State.

The preacher founded the Synagogue Church of All Nations (SCOAN), a Christian megachurch in Lagos in 1987. The church which has its headquarters in Lagos State accommodates over 15,000 worshippers per gathering. The church currently has branches in Ghana, the United Kingdom, South Africa, and Greece.

Joshua was one of the richest and philanthropic pastors in Nigeria and one of Africa’s most influential preachers, with millions of television and social media followers. More than 15,000 people from Nigeria and abroad attend his Sunday services.

He courted political leaders, sports stars and entertainment celebrities who attended his church for miracle healings, victory during elections and other matters.

In 2009, days after his victory in the country’s presidential election, late Ghanaian president John Atta Mills, flew to Nigeria for a thanksgiving service at the Synagogue Church. Mr Mills said the preacher had accurately predicted his victory at the poll.

Mr Joshua also runs a huge philanthropic operation where cash and food items are distributed to indigent members of the public and his church members.

His popularity rose after he set up Emmanuel TV which was used to broadcast the church’s programme and miracle sessions.

SCOAN had said that the death of Joshua increased the church’s followers on social media by over 600,000. The ministry also said it received tributes from 195 countries since the announcement of his demise.

“His supernatural call home was met with an outpouring of millions of testimonies and tributes from 195 countries – representing every tribe, every tongue and every nation on the face of the earth.

“The news of his departure also led to an increase of 600,000 followers on the TB Joshua Ministries Facebook Page, reaching a total of 6,200,000 — the largest of any religious figure in Africa.