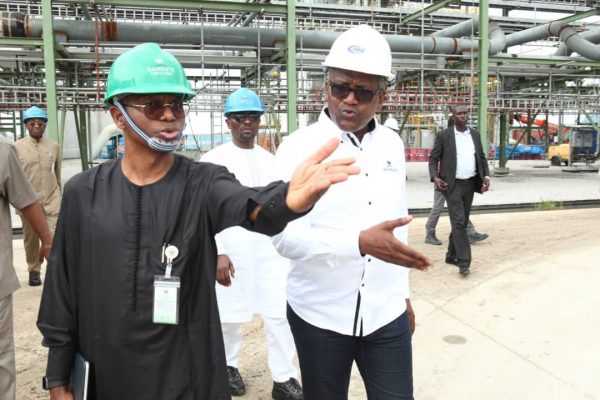 The Assets Management Corporation of Nigeria (AMCON) has trashed viral reports that it is about to seize the Dangote Refinery over an alleged $7 billion debts owed to Nigerian banks.

Dangote, right with Governor Nasir El-Rufai at the refinery site in Lagos in June 2019

The Assets Management Corporation of Nigeria (AMCON) has trashed viral reports that it is about to seize the Dangote Refinery over an alleged $7 billion debts owed to Nigerian banks.

Several online news platforms orchestrated a report that the 650,000 barrels a day Dangote refinery, which is yet to start production. is already prostate with debts.

The reports also claimed that AMCON was set to take over the refinery to recover the debts.

AMCON however, rubbished the report.

Head of Corporate Communications at AMCON, Jude Nwauzor, said neither Dangote Refinery or the Dangote Group is on its debtors’ list.

Hence AMCON couldn’t have plan to take over the assets.

He said the report is false in its entirety.

The Dangote Group also trashed the report as “false and malicious”.

Some staffers said the conglomerate has the capacity to service its debt.

The Nigerian National Petroleum Corporation (NNPC) got the approval of the Federal Executive Council to buy a 20 percent stake in the refinery at a cost of $2.75 billion.

The refinery, which is an integrated petro-chemical industry is located in the Lekki Free Zone of Lagos.

The fertiliser plant that is part of the expansive project began producing this year.

How the Rumour started

False news about the alleged debt of Dangote Refinery and its imminent take over by AMCON was first published last week by Money Management Series (MMS) Plus newspaper in Lagos.

The publication is owned by Kings Communications Limited.

In the report titled, “AMCON May Take Over Dangote Refinery As Liabilities Swell” it claimed the refinery is in a deep financial crisis as a result of a $7 billion debt burden – “a situation which indicates a possible takeover of the project by AMCON”.

It then claimed its in-house analysts projected that the refinery’s indebtedness to financial institutions would hit $8.4 billion by 2025.

Dangote Group spokesman, Tony Chiejina told the news platform to pull down the story, which lacked any corroboration from the group, the banks and AMCON.

But in a jiffy, the fake report had been lapped up by other news platforms, looking for anything salacious.