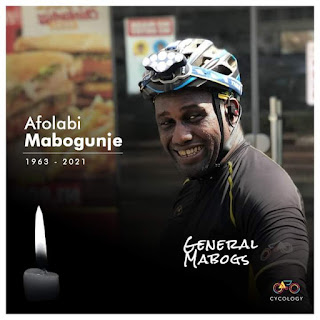 How Afolabi Mabogunje, a stabbed cyclist, died in LASUTH

Fast News reports that the late Afolabi Mabogunje’s brother recounts how he was murdered by hoodlums in Lagos.

My brother was riding early on Thursday, September 9th, 2021, around 5 a.m., as he has done for the past 10 years or so. He was at the meet-up location, which was the same as it had always been.

Then, while he was off his bike and making a phone call to his fellow cyclists, two men with knives attacked him from behind, stabbing him on both sides of his neck, right side of his chest, and left arm. A gruesome wound on the right-side separated the internal jugular vein from any other structures. A superficial branch of the internal jugular was placed on the left.

He was gushing out blood with each contraction of the right atrium.

He needed help, got on his bicycle, held it with one hand, the other handheld his neck wound, and rode to a nearby police post but the police were not there. Then he rode to a nearby bank where the security guard had a phone with no credit or data.

They were lucky a passerby was able to help him call his wife. She came to the spot, picked him up, threw his bicycle in the trunk of the car, and sped off to the nearest hospital- Gbagada general hospital!

They sutured the smaller wounds, gave IVFluids but had no Cardiothoracic

Then we hit phase 3 delay- accessing the correct care, at the correct time, in the correct way even after finally getting to the hospital!!!!!!!

We got there at about 8 am, surgery started at about 1.30 pm, no preop resuscitation because they had NO BLOOD!!!! We had to send it to Gbagada GH for blood. Friends wanted to donate but the Lasuth blood bank said because of the ongoing ARD strike they didn’t have facilities to bleed the donors!!

Was undertransfused, as far as I was concerned. He never woke up from anesthesia!

He battled the robbers, he fought for his life, we battled the system and systemic failures, everything that could go wrong went wrong!

We thank God for the life he lived, for finding and fulfilling his purpose in life, for being a big brother and father to many more than his biological children and siblings.

The Psychology Club and all affiliated cycling clubs in Lagos fondly called him the General!

He inspired us all to push beyond the limits, find and follow our passion.

I will miss you my dearest bruvver, your legacy lives on. See Less

ME: Rest in Peace Sir.