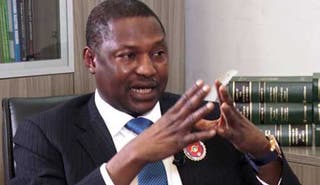 FastNews reports that Abubakar Malami, SAN, the Attorney-General of the Federation and Minister of Justice, has revealed that the Federal Government has received numerous applications from convicts and inmates seeking pardon and clemency.

This online news learned that AGF made the announcement during a meeting with members of the Committee at his ministry on Tuesday.

While revealing that the Federal Ministry of Justice received 320 such applications on behalf of inmates in detention centers across the country, Malami explained that the volume of requests his office received prompted President Muhammadu Buhari to call a meeting of the Presidential Advisory Committee on the Prerogative of Mercy, PACPM.

The AGF stated that on June 19, 2018, the Federal Government established the PACPM, which is made up of prominent Nigerians, with himself as Chairman of the Committee.

“The core mandate of the Committee is that of assisting Mr. President in the discharge of his constitutional responsibility of granting pardon and clemency to convicts or ex-convicts in deserving cases and reintegrating them back into the society geared towards decongesting Correctional Centers and discharge the role constitutionally bestowed in him in that regards.

By virtue of section 175(1) of the Constitution of the Federal Republic of Nigeria, 1999 (as amended), the President may;

“Grant any person concerned with or convicted of any offense created by an Act of the National Assembly a pardon, either free or subject to lawful conditions;

Grant to any person a respite, either for an indefinite or for a specified period of the execution of any punishment imposed on that person for such an offense;

Substitute a less severe form of any punishment imposed on that person for such an offense; or

“Remit the whole or any part of any punishment imposed on the person for such an offense or of any penalty or forfeiture otherwise due to the state on account of such an offense”, Malami stated.

He said the Committee had in 2018, after a painstaking exercise at selected Correctional facilities in various states that cut across the six geo-political zones of the country, recommended some convicts and ex-convicts for a presidential pardon.

According to the AGF, based on a report of the Committee, the presidential pardon was granted to two inmates, clemency to 39 others, while four ex-convicts were also pardoned.

He said the Council of State at its meeting on August 27, 2020, ratified and validated the President’s action which he said had since been officially gazetted.

“Since the Committee submitted its report and proceeded on recess, the Federal Ministry of Justice has received numerous applications for presidential pardon and clemency.

“However, following Mr. President’s directive to all stakeholders to swiftly ensure the decongestion of Correctional Centers in the wake of the Covid-19 pandemic and the glaring consequent danger posed to the Custodial Centers nationwide on the one part and the fact the office of the honorable Attorney-General of the Federation and Minister of Justice and that of the Committee Secretariat is being inundated with a myriad of requests for the grant of presidential pardon and clemency (320 applications) on behalf of some convicts in Custodial Centers across the nation.

In his remarks, the Minister of Special Duties and Inter-Governmental Affairs, Senator Akume, decried that the population of inmates in the country has “become a stain on the nation’s criminal justice system”.

While applauding FG for reconvening the PACPM, Akume, stressed that mandate of the Committee is to interview, select and determine convicts and ex-convicts to be granted pardon for onward recommendation to the National Council of State headed by President Buhari.

He however warned the committee to be mindful of the kind of convicts it would recommend for a presidential pardon.

“Mr. President will be relying on you as a Committee, to do what is required of him constitutionally, to grant pardon to deserving inmates, convicts, and ex-convicts.

Akume warned the committee to tread with caution to avoid releasing unrepentant criminals back into the society and thereby causing more social problems in the country.”