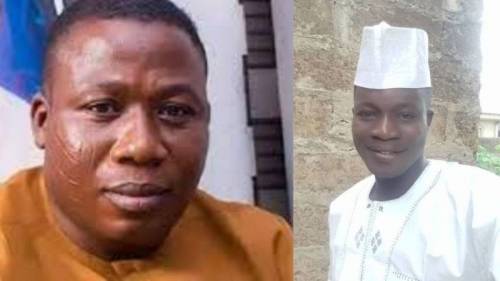 FastNews reports that Dada Fasoto Arifanlajogun, a young man who is alleged to be the witch doctor who spiritually fortifies’ Yoruba agitator, Sunday Adeyemo, aka Sunday Igboho, has been detained by the Department of State Services (DSS) since he was caught three months ago in his home in Ekiti.

In an interview with BBC Yoruba, his mother, Olomitutu Fasoto, revealed this.

The enraged mother claimed that her son has not been heard from since he was arrested three months ago by men posing as DSS agents.

She further stated that his whereabouts were unknown.

Olomitutu said the 28-year-old, since his arrest, had yet to be charged with any crime.

According to her, all efforts to find the young man particularly with visits to the offices of the DSS, police, and other security agencies have been futile as they claimed to know nothing about his whereabouts.

She said, “There are several indications that my son was taken away by the DSS because other security agencies do not have my son with them, and they do not know anything about where he was taken to.”

She added that her son is a very gentle and easygoing person who practices traditional medicine with the fear of God.

She, however, expressed surprise that he could be arrested simply because he is a herbalist ‘spiritually strengthening’ Sunday Igboho.

Olomitutu said she had consulted the gods and performed all the necessary rites as a traditionalist but everything had been in vain.

She further called on all Nigerians to help to secure the release of her son so he could return to his wife and 5-year-old son.

She said the officers who were up to 10 in number were fully armed and had arrived in two white Hilux vans.

Apalara added that the officers arrived at the herbalist’s residence at 5 pm on the 16th of July, 2021 to arrest Arifanlajogun.

Aderonke said, “When the family members tried to stop the officers from arresting him, they cunningly called the police station at Okesha and told us to come for him at the station.

”When we got to the station, we were told the officers that arrested Arifanlajogun were not from Okesha station, it was there it dawned on us that the officers lied to us and all efforts to know his whereabouts for about three months now have proved abortive.”

The report further quoted the Ekiti State Police spokesperson, Sunday Abutu as saying the Police Command was not aware of the incident.

He, however, advised the family to report the incident at the police station nearest to them.