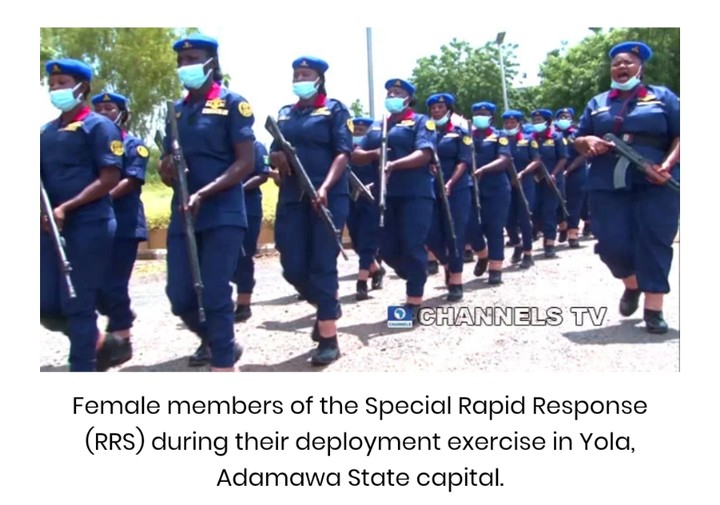 To Fight Against Kidnappers, NSCDC RRS Deployed Female To School in Adamawa

FastNews reports that a Special Rapid Response  Squard (RRS) the female Sqared will now school across the 21 Local Government Areas of Adamawa state,  this as been deployed by the Nigeria Security and Civil Defence Corps (NSCDC)

Commandant of the NSCDC in the state, Usman Waksha disclosed this on Thursday while addressing journalists in Yola, the state capital as part of activities kick-starting the deployment exercise in the state.

The deployment is in line with the Federal Government’s programme of safe school initiative aimed at providing adequate security in schools and the NSCDC Commandant General’s efforts aimed at addressing security challenges in schools across the country.

“Today, we are launching the Rapid Response Squad and the safe school programme. Our vehicles and well-trained personnel would be deployed to strategic locations in the state in addition to patrols on a 24-hour basis.

“Personnel will be deployed to schools accordingly. It is however a continuous programme, we hope to reach all targeted schools,” Waksha said.

The Commandant also promised that the agency will continue to do its best and appealed to residents of the State to cooperate with the officers for the safety of schools.

Over 60 NSCDC personnel have been deployed to boarding and day schools in Adamawa State for their safety and peaceful learning environment.

Earlier this week, the Presidency lamented the impact of insurgency and banditry on school attendance in the country noting that over 12 million children have been forced out of school.

Chief of Staff to the President, Ibrahim Gambari said this at the fourth International Conference on Safe Schools Declaration in Abuja.

Gambari, who represented President Muhammadu Buhari at the event, lamented the increasing trend of school kidnaping noting that although the abducted students are eventually released, the trauma lingers.