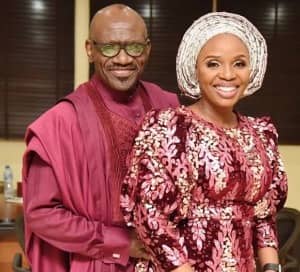 Fastnews Nigeria reports that pastor 16 years after losing first wife, Bimbo, Taiwo Odukoya, who lost Bimbo his first wife 26 years ago has been thrown into another mourning.

The presiding pastor of the Fountain of Life Church, Ilupeju, Lagos, has announced the passing onto glory of his wife of eleven years, Rosemary Simangele Nomthi (nee Zulu), a South African beauty.

Taiwo, 63, got married to Nomthi in Lagos in 2010 after his first wife, Pastor Bimbo died in the 2005 Sosoliso air crash, which also claimed the lives of hundreds of students of the Loyola Jesuit College, Abuja.

“With deep regret and gratitude to God, I have to announce the passing of my wife, Pastor Se Odukoya.

She battled cancer for the better part of two years. She stood on the word of God and she fought.

She gave me eleven beautiful years of marriage and two wonderful boys, who I know will be very significant in life.

Before death separated them, Taiwo and Bimbo were married for 21 years. The union was blessed with three children – Tolu, Jimi and Tobi.

The marriage between Him and Nomthi is blessed with two male children.