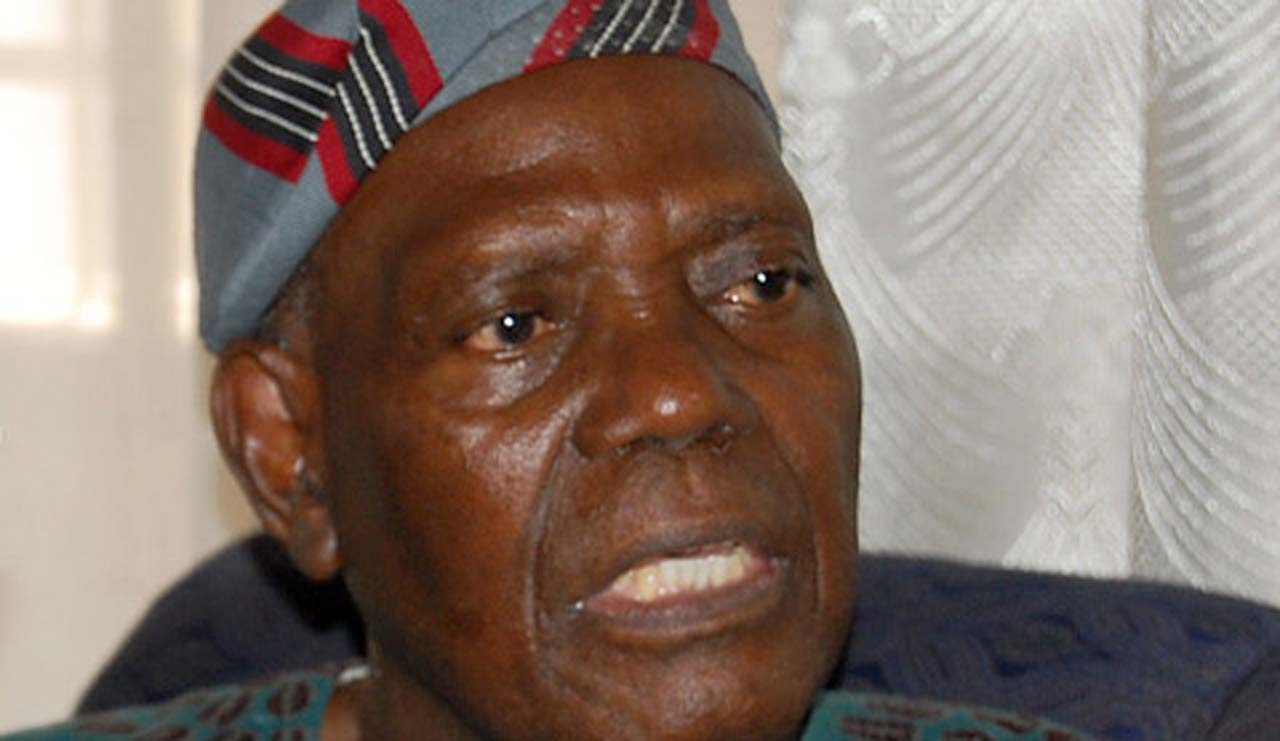 Obasanjo, the northern elite, and monarchs warned the APC not to run Buhari-Akande.

FastNews reports that Chief Bisi Akande, the pioneer Interim National Chairman of the ruling All Progressives Congress, has revealed the intense pressure exerted on the party by influential individuals to ensure that Major General Muhammadu Buhari (retd.), now President, did not emerge as the party’s candidate for the 2015 election.

In his 559-page autobiography, titled ‘My Participations,’ which was released in Lagos on Thursday, Akande claimed that people like former President Olusegun Obasanjo and some unnamed elite, particularly from the north, including royal fathers, were opposed to Buhari becoming the party’s candidate.

The former governor of Osun State explained that an aristocratic leader from the North came to Osogbo, the state capital, to persuade the state’s then-governor, Rauf Aregbesola, to persuade them to drop Buhari. He, however, said the leaders of the newly formed party decided to go ahead with Buhari, given his charisma and the support he had garnered in his previous attempts, having contested the coveted position three times earlier. He said the emergence of the APC created a formidable structure for him and that Buhari’s candidacy was in fact one of the reasons for the merger of the constituent political parties.

Regardless of this, he noted that the party allowed anybody interested in the ticket to contest against Buhari at the convention, where he eventually won.

On Obasanjo’s opposition to Buhari’s candidacy, he wrote, “When the party was ready and we were going around to all the leaders, someone reminded us that we had not seen Obasanjo and (former Head of State, Ibrahim) Babangida, and asked them to join us.

“We also met Obasanjo and asked him to join us. He said he would not join us but that he had his sympathy for us. He said he had decided not to join any political party since he left the PDP (Peoples Democratic Party).

“Behind the scene however, I understood he was pressurising some of our leaders not to use Buhari as our candidate. It got to a point when Bola Tinubu had to confront him thus: ‘It is not fair sending me to Buhari. Buhari was a soldier and he was one of your junior offices in the army. Why don’t you call Buhari and let him know how you feel about his intention to be President?’

“I don’t know whether Obasanjo stopped at it. From the start, he did not want Buhari to be President.”

Also, on the opposition by the other elite, Akande wrote, “It was apparent from the start that Buhari would be our choice for President. That was one of the bases for the merger. However, there were pressures from the elite, especially from the North, including royal fathers, piling pressure on us not to allow Buhari to be our presidential candidate.

“A prominent aristocratic leader from the North stayed several nights in Osogbo, persuading Governor Aregbesola to prevail on us not to field Buhari. He threatened that if we did, there would be trouble in the North. We reviewed all these threats and decided to go through it with Buhari.”

Akande also described the leader of pan Yoruba socio-political group Afenifere, Chief Ayo Adebanjo, has a blank politically-minded leader who does not have what it takes to contest political positions.

He further said Adebanjo pestered APC National Leader, Asiwaju Bola Tinubu, to build him a house in Lekki, where he now resides.

He also stressed that contrary to what Adebanjo believed, the ruling APC did not have restructuring in its manifesto in 2014 when the party presented Buhari as its flagbearer, adding that APC only promised to support devolution of powers from centre to states.

On page 476, Akande wrote, “APC did not have ‘Restructuring’ in its manifesto for the 2015 elections but promised to support devolution of powers from the centre to the states.

“While the President (whether Obasanjo, Yar’Adua, Jonathan or Buhari) has the whole of Nigeria as his constituency, members of the National Assembly that have the powers to amend the Constitution imposed on Nigeria by the military represent constituencies individually from different ethnic nationalities.

“It is therefore mischievous to place the responsibility for effecting ‘restructuring’ on the APC or its Presidency and not to appreciate that it would require deft negotiations among such members from different ethnic nationalities and constituencies or zonal and religious background before any political party or any ethnic nationality could successfully issue any fiat on the National Assembly to make laws on power devolution or on ‘restructuring’, whatever it might connote.”

The APC chieftain further alleged that the trio of Adebanjo, Sir Olaniwun Ajayi, and the late Chief Olu Falae should have found younger Yoruba sons to represent the South-West at the 2014 National Conference convened by former President Goodluck Jonathan instead of pocketing “generous allowances” given to conference delegates.

Akande said, “I was not surprised that three old men who were virulently opposed to our aspirations in the APC found their ways into the Jonathan Conference. These men – Sir Olaniwun Ajayi, Chief Ayo Adebanjo and Chief Olu Falae were once our leaders in the old Afenifere until the passage of Papa Adesanya.

“They could not find any younger Yoruba to send to the conference to represent our interest. They believed, even in their old age, that they were the only people who could have gone there. Sir Ajayi, who was close to 90 at the time of the Conference, has since joined his ancestors. Chief Adebanjo celebrated his 90th birthday in 2018. Chief Falae is in his 80s. Note that Jonathan paid the conference delegates generous allowances!”

Reminiscing on the formation of Afenifere, the ex-governor of Osun State
recalled that “Chief Olu Falae, a trained civil servant, who after retirement became decorated into leadership by his former military bosses, has since been trying to blindly straddle Nigeria’s complicated politics.

“The old Afenifere and PDP coalition was fronted by these three men and General Obasanjo. Chief Adebanjo, the most vociferous of them, is a blank politically-minded leader who recognises readily and always that he never has what it takes to aspire for high political positions.

“He constantly harbours lumps of yellow hate-bile in his heart for any co-political leader with brighter chances for any major public office within or outside his political party. Adebanjo detests all past governors produced by his party since the UPN days and proudly says so in his regular pontifications. I always passed him for a mere political agitator among the old local party paid canvassers euphemistically called ‘organising secretaries’.”

Continuing, Akande alleged that Adebanjo coerced Tinubu to build a house for him in the Lekki area of the state.

“One day, Sir Olaniwun was launching a book at Muson Centre, Lagos. After the book presentation, Tinubu said I should not go and that he would like to see me. We met in a small room where he also invited Sir Olaniwun Ajayi. ‘Papa, you can see that this document is old, Tinubu said as he handed over a big envelope to Ajayi. This is your C of O (Certificate of Occupancy)!’

“Tinubu told me later that after he presented Adebanjo’s C of O to him, Adebanjo was always pestering Tinubu until he helped built a house on the plot. The street was also named in honour of Adebanjo and he is living in that house now at Lekki Phase One,” Akande said.

When contacted on Friday, Adebanjo said he would give his response after carefully reading the book. “I’m not going to depend on hearsay; I am going to give a written reply after reading the book,” he said.

Efforts to get a reaction from Obasanjo on the statement made by Akande failed, as his media aide, Kehinde Akinyemi, did not respond to the message sent to him.

Meanwhile, Akande also said a former Minister of Foreign Affairs, Chief Tom Ikimi; a former governor of Kaduna State, and a chieftain of the defunct Congress for Progressive Change had during the formative stages of the APC tried to hijack the party if and when it got registered by the Independent National Electoral Commission.

He said he had received reports that Ikimi and some members of the then Joint Merger Committee, comprising different political parties that had come together to form the APC, had tried to “share among themselves the new party leadership official positions”.

Akande, in his book, said a former governor of Kaduna State, had while lobbying for the position of the national secretary of the APC, told him that meetings were being held at the residence of Ikimi, who was then a member of the Action Congress of Nigeria, that the former minister had at the meetings been slated to become the national chairman of the APC while the position of the treasure “was perhaps being reserved for a chieftain of the Congress for Progressive Change, Alhaji Garba Gadi.

“To put practical effect to their mischief, Chief Tom Ikimi had been arranging a sort of public meeting – perhaps some sort of convention in an ostensible manner – which he termed, ‘APC Leadership Meeting’ at the Transcorp Hilton Hotel. I remained the chairman of the CAN that sponsored Tom Ikimi to the merger committee.

“He, as coordinating chairman of the Joint Merger Committee, wrote me an invitation for a public meeting of APC which to me was still waiting to be registered into corporate existence. What a hijack indeed!”

But reacting, Ikimi said he would react to the allegation of the former interim national chairman of the APC in a book he is currently writing.

“Well, I didn’t hear it (allegation). I was not there. I am writing my own book. I will react to it (Akande’s allegation) then (in my book),” he told one of our correspondents on the phone on Friday. ,,