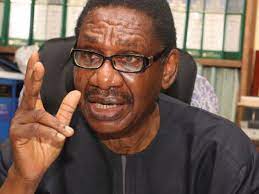 Sagay: Abubakar Malami has no control over PACAC, and he has no authority over our activities.

FastNews reports that Prof. Itse Sagay (SAN), Chairman of the Presidential Advisory Committee Against Corruption (PACAC), has stated that the body is not under the supervision of the Attorney-General and Minister of Justice Abubakar Malami (SAN).

In an interview with the DAILY INDEPENDENT, Sagay stated that, unlike the EFCC and ICPC, which are overseen by Malami, the Minister has no authority or influence over PACAC.

“PACAC is not an agency under the Attorney-General and Minister of Justice,” he explained. He has never initiated anything that requires us to comply.”

“What has been happening is similar to a mutual understanding between PACAC and the Attorney-office.” General’s When they have a program, they invite us, and when we have a program, we invite them as well.”

”But he has no power, authority, or influence over anything we have been doing. We are two separate organizations. He is an executive type of institution, while we are more of a think-tank with some capacities for coordination of the anti-corruption agencies”.

” He has his own powers over them and we also have our own powers running on parallel lines but there is no hierarchy between us and them”.

“We are not above the Ministry of Justice and they are also not above us. They are running their own and we are running ours too but we cooperate where necessary”.