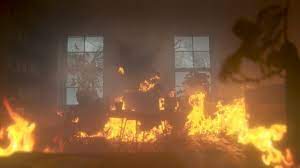 An angry husband sets fire to his mother-of-four and brother-in-law.

FastNews reports that the Lagos State Police Command has arrested Benjamin Ogudoro, 50, for allegedly setting his wife, Chinyere, and his brother-in-law, Ifeanyi Edoziem, on fire in their apartment.

According to reports, the incident occurred in the early hours of Friday, April 1st, 2022, in House 5 Oteyi community, Abule- Ado, in Amuwo Odofin Local Government Area of Lagos.

According to reports, the couple had an undisclosed marital crisis, prompting the 46-year-old wife and mother of four to relocate to Scotland for four years before returning to Nigeria after learning that her husband planned to sell the house she built in Nigeria.

On arrival at the Muritala Mohammed Airport, Ikeja, her younger brother and only son of their parents, Ifeanyi, went to pick her up from the airport.

It was reported that after allegedly setting the duo on fire, Ogudoro placed a call to one of her sisters alerting her that their house was on fire, but that he managed to escape while his wife and her brother were trapped.

However, the true situation of things was revealed by Ifeanyi on his dying bed.

Groaning in excruciating pain from the burns, on the hospital bed, Ifeanyi said, “My sister and I were sleeping when her husband came in late, banging on the door.

“We had a little misunderstanding as he accused me of locking him outside. I told him I didn’t that I only used the key lock and that besides, he could have opened it since he had his keys with him.

“He kept shouting that I locked him out. He insulted me and my sister. But we kept quiet. He left the room, only to return when we had fallen asleep. He poured petrol on us, lit a match, and went out.

”We were burning. I managed to escape but couldn’t save my sister. I was fortunate enough to survive.”

But his joy of survival was short-lived as he passed on moments later at the hospital.

Benjamin said that the suspect had been transferred to the State Criminal Investigations Department, SCID, Yaba, on the directive of the Commissioner of Police, CP Abiodun Alabi, for further investigation, adding that the corpses had been deposited at the Mainland Hospital mortuary, Yaba, for autopsy.