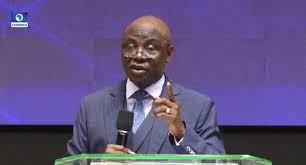 I will succeed Buhari as President 2023 Pastor Tunde Bakare

FastNews report that a 67-year-old pastor, Tunde Bakare would have been Nigeria’s Vice President had President Muhammadu Buhari won the 2011 election in which the former was his running mate.

Even now, Bakare claims God has revealed to him that he would succeed Buhari as president. Perhaps because the assurance is so certain, he is not even bothered about campaigning for the 2023 election.

It is assumed that for a man who aspires to such high public office, he would think things through before going public. The least expected of such a man is not to retell in public, with a note of authority, childish, beer parlour gossips that over the past five decades have mutated like variants of the COVID-19 pandemic.

As with tales in taverns fuelled by idleness, alcohol and small chops, in the case of Nigeria, by pepper soup and ‘404’ endlessly washed down with palm wine, burukutu, ogogoro and beer, such tales mutate depending on who is telling them and for what purpose.

The theme of Bakare’s watering hole gossip is the old, discredited one that seeks to clothe former Prime Minister Abubakar Tafawa-Balewa in the garb of a deity who placed an effective curse on the Igbo nation.
Let us examine one of the versions of the Balewa tale. It is planted in the 888-page book, “A Right Honourable Gentleman: The Life and Times of Alhaji Sir Abubakar Tafawa Balewa,” and was published in 1991 by Hudahuda Publishing Company, Zaria. It was authored by Trevor Clark, a former British soldier and colonial officer in Nigeria. For his childish claims, Clark relied on “most sources” to write his version. On Page 802, he wrote: “Another (version) colourfully claims that Okafor (Major Donatus) offered to spare him if he would drink some alcohol, and that Abubakar refused utterly as a true Muslim, but had something to say before they killed him: ‘Ibo! Ibo! Ibo! Igbo! Sai kuna rasa wajen zama a Nijeriya!In Nigeria, you will be without a place to call home).

In this version, Okafor, an Igbo, is portrayed as a godless individual who attempted to persuade a devout Muslim to commit a sin, for which Balewa is said to have cursed the Igbo as a people who will forever roam Nigeria as vagabonds.
It is instructive that the only people present when this “curse” was uttered were the coup plotters, and none of them made such a report. So who witnessed this? It’s just a childish fabrication. On the same page, the British biographer claimed, again without any fact or attribution, that Major Okafor was “the man who shot Alhaji Sir Abubakar Tafawa Balewa over the heart with a sub-machine gun.”

The “curse” version Bakare is spreading is the one planted on Page 689 of the 799-page book, Ahmadu Bello, Sardauna of Sokoto: Values and Leadership in Nigeria, published by Hudahuda Publishing Company, Zaria in 1986. The book was written by another paid foreign biographer, John N. Paden.

In this version, the person Balewa was supposedly addressing and who allegedly shot him was not Major Okafor but Major Emmanuel Ifeajuna. Also, the alleged curse by Balewa is different. This version quoted Balewa as saying, “I know you are going to kill me; you will never get a Prime Minister like me. The Igbo will suffer for 25 years. “
If this were true, then it was a failed curse because the person who replaced Balewa was an Igbo, General Thomas Aguyi-Ironsi, who not only combined the offices of the Prime Minister and the President, but also legislative powers. Secondly, if the “curse”, according to this version, was to last 25 years, what was the business of Bakare lifting it 31 years after it had expired?

Even for a poor Nollywood script, this story line is manifestly silly. First, who witnessed this exchange? What is the source? Why is such an exchange not reflected in Ifeajuna’s manuscript or any book by those who were present at the scene?

He is not a vacuous youth and ought to know that his idle pepper soup joint talk about unbelievers pouring alcohol on a pious Prime Minister, leading to a so-called curse, can elicit negative religious and ethnic reactions, especially in a country where we have failed to educate a growing number of our population. If Bakare is not given to deep reflection on his thoughts and public pronouncements, how does he think his claims that the Almighty has anointed him as President Muhammadu Buhari’s successor will come to pass? Or are his prophesies and claims of God talking to him just like in the Balewa story?

An issue arises from these tales. What really happened to Balewa after his abduction? The main story was that he was shot on coup day, January 15, 1966. But there are other suggestions that he might have been alive beyond that day. In the book, Let Truth Be Told: The Coups d’Etat of 1966 by D.J.M. Muffet, which was a counter narration of the coup, there is a suggestion on Page 42 that following the killing of Premiers Ahmadu Bello in Kaduna and Ladoke Akintola in Ibadan and the coup unravelling, the possibility of Ifeajuna and Okafor keeping the Prime Minister alive to use “as a bargaining chip is a very real one indeed” (Hudahuda Publishing Company, Zaria, 1982).

A cabinet member, Chief Matthew Mbu, perhaps relaying what the cabinet was told, asserted that Balewa “was not killed by soldiers but by asthma”.

Respected Segun Osoba, the journalist who discovered the Prime Minister’s corpse before the security services, reported in the Daily Times newspaper issue of January 22, 1966, that Balewa had no bullet holes and, in fact, no blood stains, suggesting he was not shot.
Back in January 1966, the Daily Times was the major and most authoritative newspaper in the country. If its report on the discovery of the Prime Minister’s corpse with details that he was neither shot nor had blood stains had been false, there would have been an official rebuttal and the Daily Times would have been made to carry an apology. But nothing like that happened.

Sir Ahmadu Bello was Balewa’s political leader; if the events leading to his death could be so clearly captured, why would there be any attempt to cover up Balewa’s death? Why are the reports of the Special Branch of Police, the British secret services, and the British pathologist who examined Balewa at the Lagos University Teaching Hospital not made public 54 years after his death?

Nothing in this write-up exonerates the 1966 coup plotters from the death of Balewa because, whatever the cause, it would have been triggered by his abduction. But Nigerians deserve to know, rather than continue to encourage tales by moonlight.